When implementing integration projects, it’s quite common that upstream systems don’t have the capabilities to push messages to downstream systems, or that due to different constraints or non-functional requirements, the receivers are required to pull for messages from those systems. Gregor Hohpe describes in his book “Enterprise Integration Patterns” the Polling Consumer Pattern, in which a receiver is in charge of polling for messages from a source system. In this pattern, the receiver usually polls for messages with an incremental approach, i.e. polling only for changes from the source system; as opposed to getting a full extract. In most of these scenarios, the provider system does not keep any state on behalf of the receiver; thus, it is up to the receiver to keep a state which allows it to get changes since the previous successful poll.

Azure Logic Apps provides many trigger connectors which already implement the Polling Consumer Pattern out-of-the-box. For example, the Salesforce adapter, can trigger a workflow when a record is created or modified; the SharePoint adapter can initiate a workflow when a file or an item is created or modified; and the Gmail adapter can start a workflow when an email arrives. All these triggers work on a recurrent basis, e.g. every 5 minutes. For all these triggers, the Logic App adapter has to keep a trigger state or polling watermark which allows the connector to get only changes since the last poll. For example, the Gmail connector has to know if there are new emails since the last time it executed a poll. This trigger state or polling watermark should work even if we temporarily disable the Logic App. Even though there are many trigger connectors that make our life very easy, there might be scenarios in which a polling trigger connector is not available for a particular API or system. For example, what if we need to poll for changes from an Oracle database, from a custom API, or from an Atom feed? In this blog, I will show how to implement a custom Polling Consumer Pattern using Azure Logic Apps for those scenarios in which a trigger connector is not yet available.

To illustrate the implementation of the Polling Consuming pattern, I will implement a fictitious scenario in which ‘New Hire´ events in an HR System are used to trigger other processes, e.g. identity and workstation provisioning. You might imagine that the end-to-end scenario could be implemented using the Publish-Subscribe Pattern. That’s true, however, on this blog I will focus only on the Polling Consumer interface on the Publisher side.

The HR System of my scenario provides an Atom feed for polling for updates. This Atom feed is exposed as a RESTful API endpoint and requires two query parameters: ‘updated-min’ and ‘updated-max’. Both parameters are date-time in an ISO 8601 UTC format (e.g. yyyy-MM-ddTHH:mm:ss.fffZ). The lower bound (updated-min) is inclusive, whereas the upper bound (updated-max) is exclusive.

Even though my scenario is using a date-time polling watermark, the same principles can be used for other types of watermarks, such as Int64, base64 tokens, and hashes.

Coming back to my scenario, let’s imagine that my Logic App is to be run every 10 mins, and I start it on the 1st of May at 8 AM UTC time; I would expect to send from my Logic App to the HR System http requests like the following:

To implement this pattern, I will use:

Show me the code!

After describing the scenario, let’s start having fun with the implementation. To implement the pattern, I will follow the steps below:

Each step is described in detail as follows,

You might already have an Azure Resource Group which contains other resources for your solution. If that’s the case you can skip this step. I will start creating a new Resource Group for all resources I will be using for this demo. I’ll name it ‘pacopollingconsumer-rgrp’ 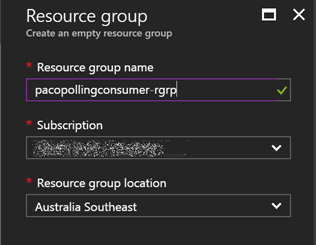 2. Create an Azure Storage Account, create a Table, and populate the Table with the Polling Watermark

Once I’ve created the Storage Account, I’ll create a table. I’ll use the Azure Storage Explorer for this. Once, I’ve downloaded it, I will open it and add my Azure Account by signing in to Azure. 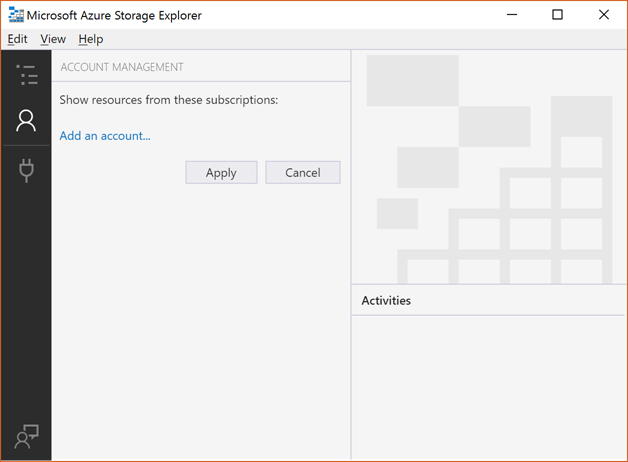 After signing in, I select my subscription. Then, I should be able to see all my existing Storage Accounts 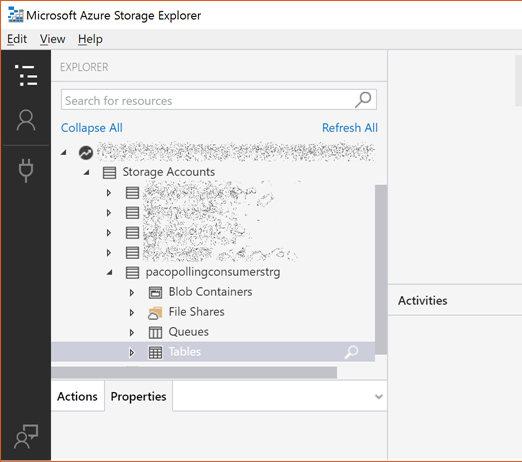 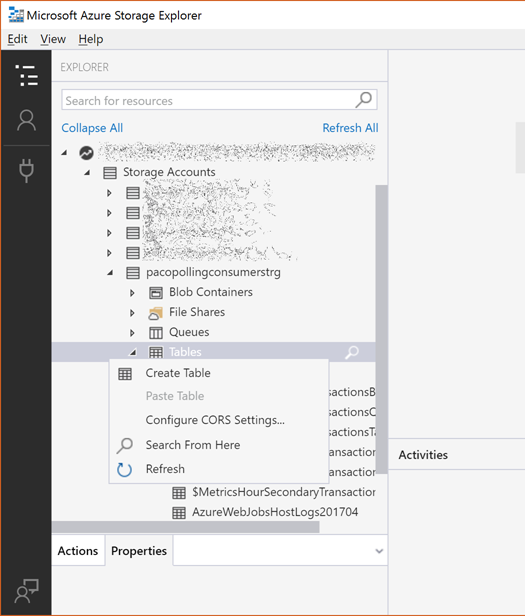 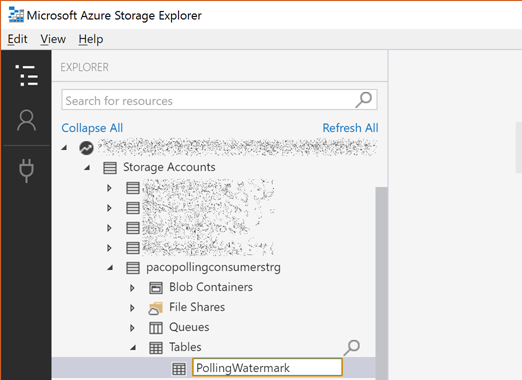 Once the Table has been created, I’ll add a new Entity

As mentioned above, I want to be able to use this table to handle more than one entity and more than one source system. I’ll use the Table PartitionKey to store the Source System, which for this demo I’ll use ‘HRSystem’, and the RowKey to store the Entity, which will be ‘EmployeeNewHire’. I will create a new column of time DateTime to store my Watermark, and I will set my initial value. Bear in mind that the Azure Storage Explore works with local time, however, the value will be stored in UTC. 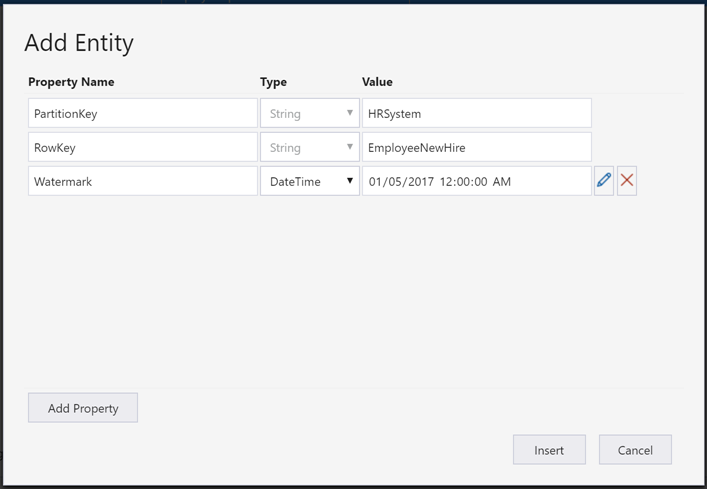 Cool, now we have our Azure Table Storage ready :)

At the time of writing this post, there is no Logic App connector for Azure Table Storage. There is already a user voice for it here, and if you want it, I would suggest you to vote for it. (I already did ;) ) In the absence of a Logic App connector for Azure Storage Table, we will be using an Azure Function App for it. I’ll create an Azure Function App called ‘pacopollingconsumer-func’ on my resource group, using the recently created storage account for its logs, and will use the consumption plan option, which is priced based on execution, as explained here.

Once I’ve created my Function App, I’ll download the publish profile which I’ll be using later to publish my functions.

4. Develop and Deploy the Azure Functions

Some notes in regard to my ‘PacodelaCruz.PollingConsumer.FunctionApp’ project 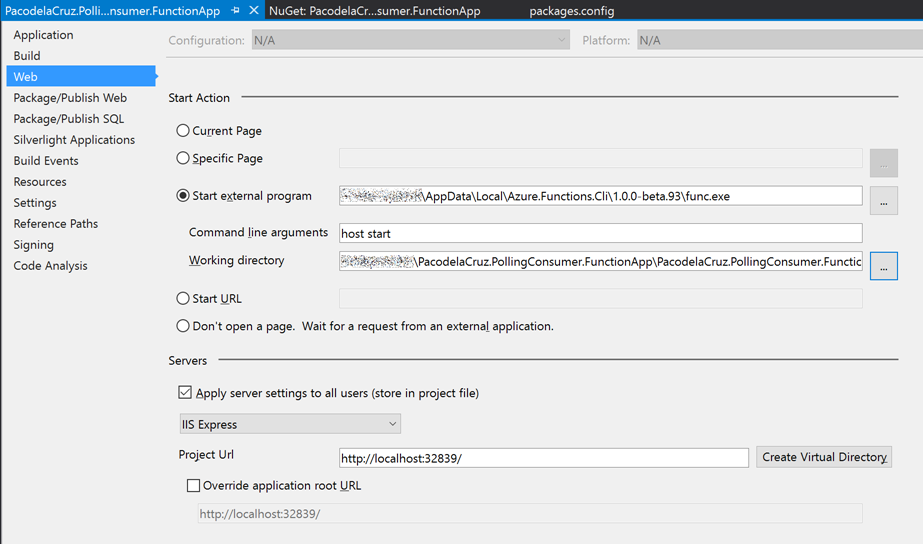 Now, let’s explore the different components of the project:

Now, let’s have a look at the Functions code:

Once you have updated the appsettings.json file with your own connection strings, you can test your functions locally. You can use PostMan for this. On Visual Studio, hit F5, and wait until the Azure Functions CLI starts. You should see the URL to run the functions as shown below.

Once your project is running, you can then call the functions from PostMan by adding the corresponding query parameters. By calling the GetPollingWatermark function hosted locally, you should get the PollingWatermark, as previously set, as a JSON object.

To call the UpdatePollingWatermark function you need to use the PATCH method, specify that the body is of type application/json, and add in the Request Body, as obtained in the previous call. After calling it, you should see that the PollingWatermark has been updated based on the sent value. So far so good :) 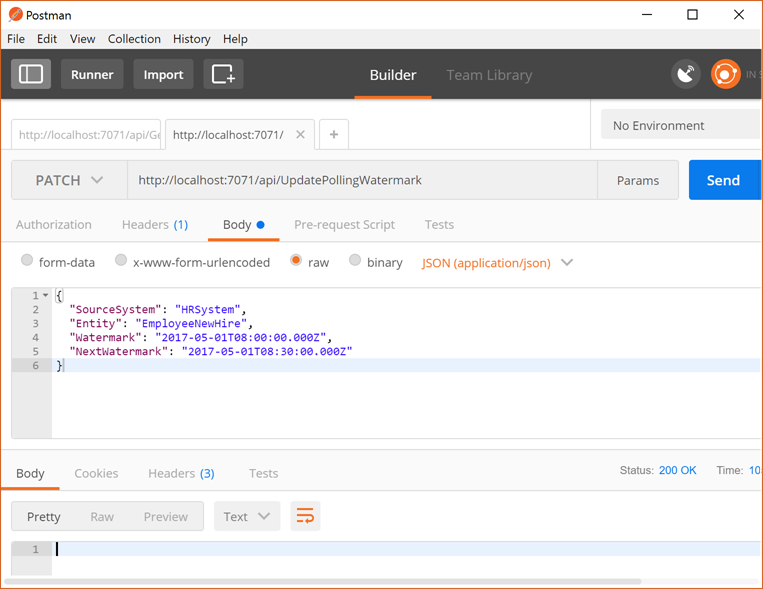 After having successfully tested both functions, we are ready to publish our Function App project. To do so, we have to right click on the project, and then click Publish. This will allow us to import the Publish Profile that we downloaded previously in one of the first steps described above. 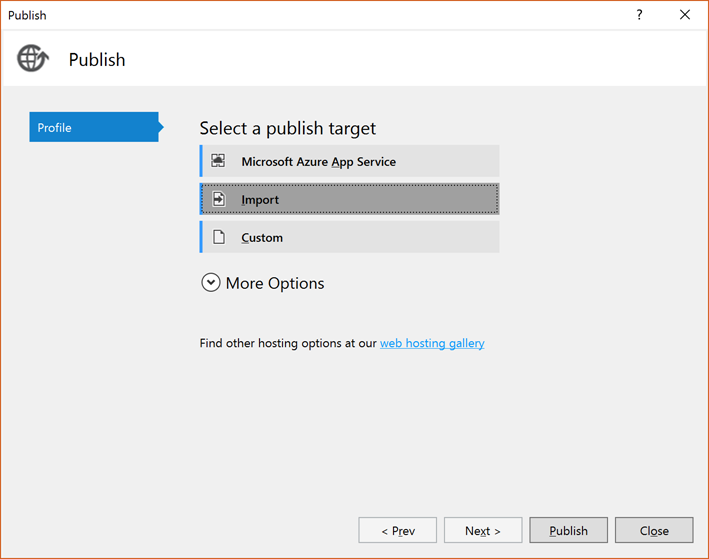 Now you should be able to test the functions hosted on Azure. You need to go to your Function App, navigate to the corresponding function, and get the function URL. As I set the authentication level to function, a function key will be contained in the URL.

Bear in mind that we need to add the corresponding query params or request body. Your URLs should be something like:

Now that we have implemented the required Azure Function, we are ready to build our Logic App. Below you can see the implemented workflow. I added the following steps:

In case it’s of help, you can have a look at the code view of the Logic App. Just bear in mind that I removed some sensitive information.

Now that you have seen how I have implemented the custom Polling Consumer Patterns on Azure Logic Apps supported by Azure Functions and Azure Storage Tables, you should be able to implement the same pattern with slight variations for your own scenarios. You might need to use a numeric or a hash polling watermark, or instead of passing it to an API, you might need to pass it to a Function, that on its turn, queries a database for which a connector with a trigger is not yet available.

As discussed above, you can implement the same pattern with slight variations to accommodate your own scenarios with different requirements; and I really hope this post will make your implementation easier, faster, and more fun. Do you have any other ideas or suggestions on how to implement the custom Polling Consumer Pattern? Feel free to share them below J

I hope this has been of help, and happy clouding!

Cross-posted on Deloitte Platform Engineering Blog Follow me on @pacodelacruz